A frequent problem in processing texts is the need to segment one or few documents into many documents, based on segments that they contain marking units that the analyst will want to consider seperately.

This is a frequent feature of interview or debate transcripts, for instance, where a single long source document might contain numerous speech acts from individual speakers. For analysis, it’s likely that we would want to consider these speakers separately, perhaps with the ability to combine their speech acts later by spearker.

Here, we show how this can be done using the quanteda R package, using a debate from the 2016 U.S. presidential election campaign. This was the tenth debate among the Republican candidates for the 2016 election, took place in Houston, Texas on 25 February 2016, and was moderated by CNN. We demonstrate how to download, import, clean, parse by speaker, and analyze the debate by speaker.

Getting the text into R

The first step involves loading the debate into R. To read this text, we can use the rvest package, which will automatically extract text from the US Presidency Project website.

We can see what the text looks like by examining the first and last parts of the text.

To get only the text spoken by each candidate, we still need to remove the non-text markers for events such as applause. We can do this using a substitution of the text we wish to remove for the null string “”, using the powerful stringi package’s stri_replace_all_regex() function. (As an alternative, we could have used gsub() or stringr::str_replace() but we prefer stringi.)

Now we can see that the in-text notes such as “[applause]” are removed.

Creating and segmenting the corpus

Let’s now put this into a single document, to create as a quanteda corpus object for processing and analysis.

Because we want this as a single document, we will combine all of the lines read as separate elements of our character vector txt into a single element. This creates a single “document” from the debate transcript. (Had we not scraped the document, for instance, it’s quite possible that we would have input it as a single document.)

We can now use the summary() method for a corpus object to see a bit of information about the corpus we have just created.

Our goal in order to analyze this by speaker, is to redefine the corpus as a set of documents defined as a single speech acts, with a document variable identifying the speaker. We accomplish this through the corpus_segment() method, using the fact that each speaker is identified by a regular pattern such as “TRUMP:” or “BLITZER:”. These always start on a new line, and the colon (":") is always followed by a space. We can turn this into a regular expression, and feed it as the pattern argument to the function corpus_segment().

We needed to add case_insensitive = FALSE because otherwise, the upper case character class will be overwritten, and we will pick up matches for things like the “now:” in “I’m quoting you now: Let me be…”.

This converts our single document into a corpus of 533 documents, extracting the regular expression. match in the text to pattern

Let’s rename pattern to something more descriptive, such as speaker. To do this robustly, we will lookup the position of the names of the docvars and replace it.

We can clean up the patterns further through some replacements.

Now we can see that the tags are better:

We are only interested in the speakers who are presidential candidates, so let’s remove the moderator Wolf Blitzer, the panelists Dana Bash, Maria Celeste Arrarás, and Hugh Hewitt, and the generic tags “Moderator”, “Participants”, and “Panelists”.

Now we have only statements from the five Republican candidates in our corpus.

Removing the final speaker (Blitzer) also removed some footer text that was picked up as following this tag.

Because we removed Blitzer above when we created corpcand, we don’t need to worry about removing the Footer text identifying the source of the document as being the American Presidency Project.

Analysis: Who spoke the most?

To count and compare speech acts, we can tabulate the speech acts and plot the speaker frequency as a barplot. 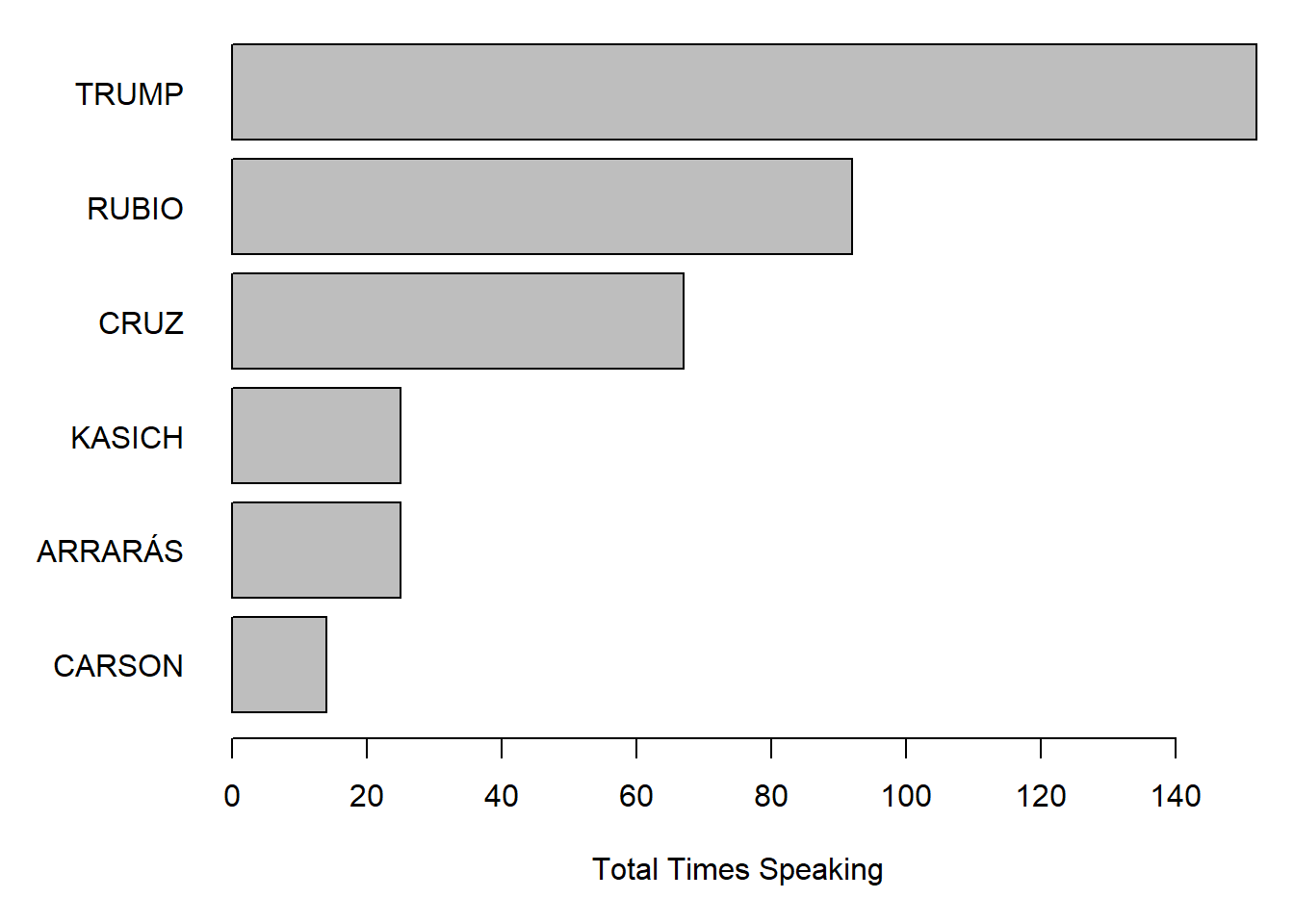 To compare candidates in terms of the total words spoke, we we can get the individual words from ntoken(). 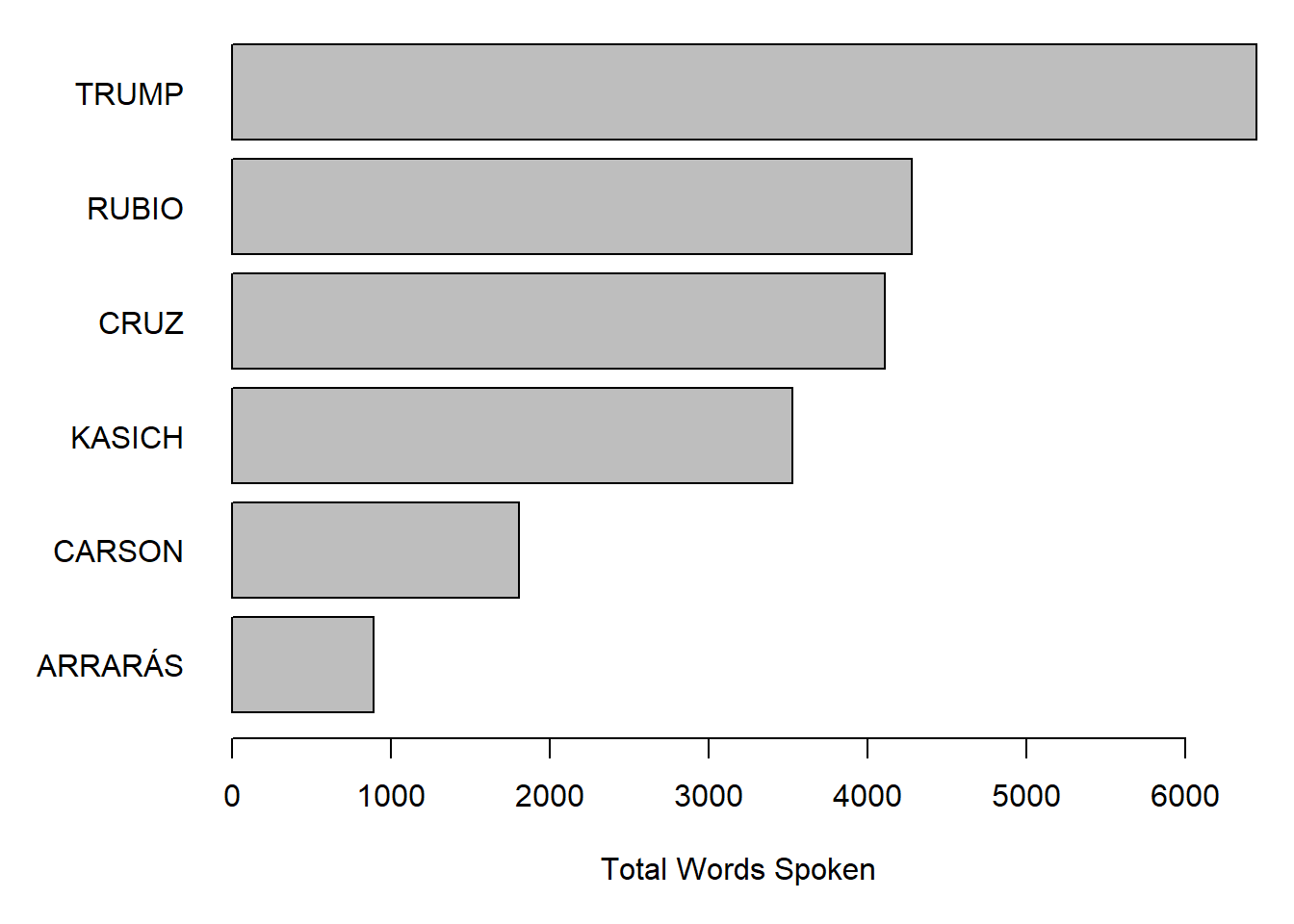 The ntoken() function does the work here of counting the tokens in the vector of texts returned by the call to texts(corpcand, groups = "speaker"), which extracts the texts from our segmented corpus and concatenates all texts by speaker. This results in a vector of the same 6 speakers as in our tabulation above. Passing through the remove_punct = TRUE option in the ntoken() call sends this argument through to tokens(), meaning we will not count punctutation characters as tokens.

In both examples, we can see that Trump spoke the most and Carson the least.

Analysis: What were they saying?

If we wanted to go further, we convert the segmented corpus into a document-feature matrix and apply one of many available psychological dictionaries to analyze the tone of each candidate’s remarks.

Here we demonstrate this using the Regressive Imagery Dictionary, from Martindale, C. (1975) Romantic Progression: The Psychology of Literary History. Washington, D.C.: Hemisphere. The code below automatically downloads a version of this dictionary in a format prepared for the WordStat software by Provalis, available from http://www.provalisresearch.com/Download/RID.ZIP. quanteda can import dictionaries formatted for WordStat, using the dictionary() function. We will apply the RID dictionary to find out who used what degree of “glory”-oriented language. (You might be able to guess the results already.)

This is a nested dictionary object with three primary keys:

There are additional keys nested inside each of these. We can show the number of values for each nested entry for the “EMOTIONS” top-level key.

We can inspect the category we will use (“Glory”) by looking at the last sub-key of the third key, “Emotions”.

Let’s create a document-feature matrix from the candidate corpus, grouping the documents by speaker. This takes all of the speech acts and combines them by the value of “speaker”, so that the new number of documents is just five (one for each candidate).

Because the texts are of different lengths, we want to normalize them (by converting the feature counts into vectors of relative frequencies within document):

Now we are in a position to apply the RID to the dfm, which matches on the “glob” formatted wildcard expressions that form the values of the RID in our data_dictionary_RID object.

Inspecting this, we see that all tokens have been matched to entries in the Regressive Imagery Dictionary, so that the new features are now “keys”, or dictionary categories, from the RID.

We can inspect the most common ones using the topfeatures() command, which here we will multiply by 100 to get slightly easier to interpret percentages.

We could probably spend a whole day analyzing this information, but here, let’s simply compare candidates on their relative use of language in the “Emotions: Glory” category of the RID. We do this by slicing out the feature with this label.

To make this a vector, we force it using as.vector(), as there is no drop = TRUE option for dfm indexing. We then reattach the document labels (the candidate names) to this vector as names. We can plot it using a dotplot, showing that Trump was by far the highest user of this type of language. 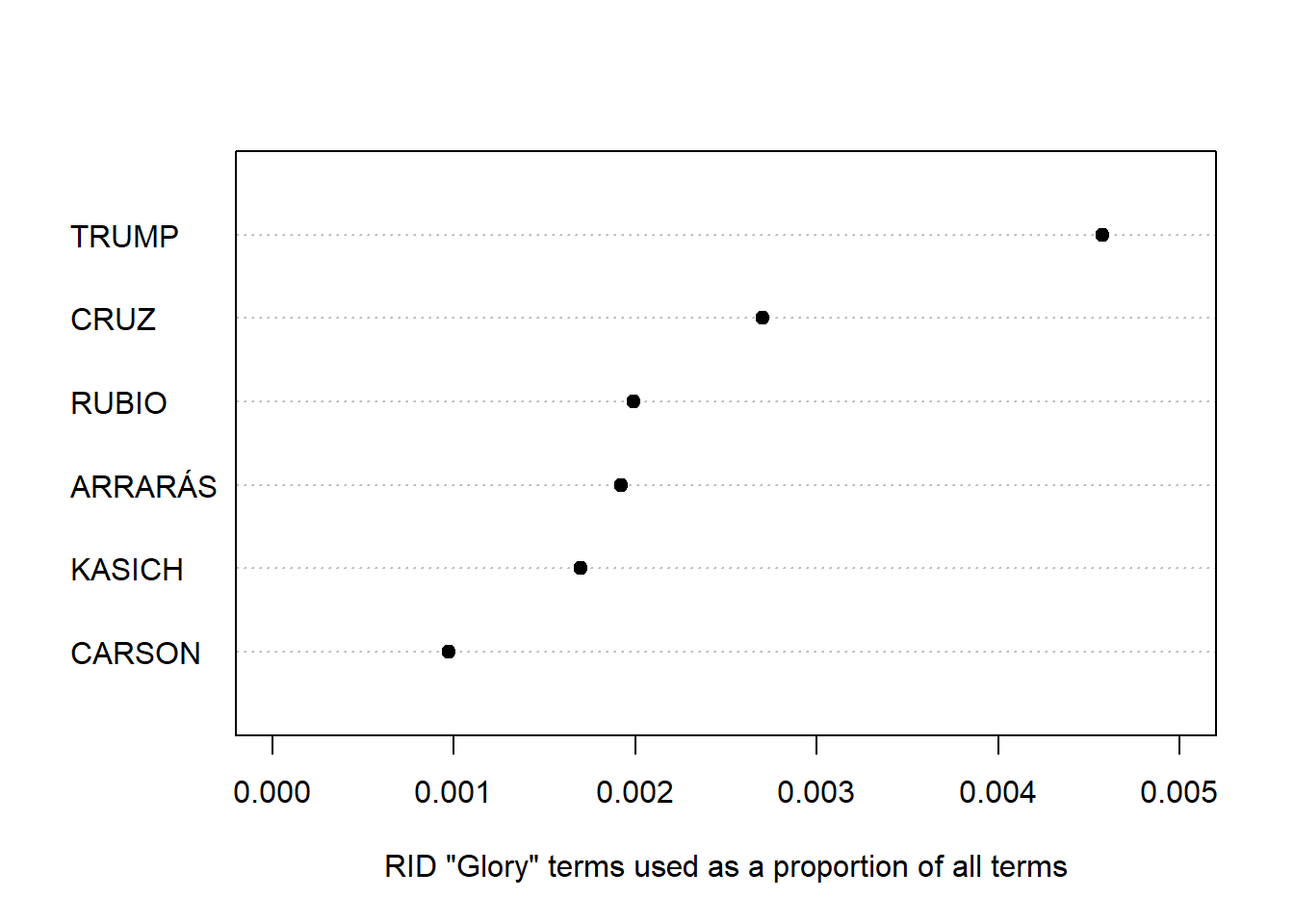 Comparing one candidate to another

Thus far, we have employed some fairly simple plotting functions from the graphics package. We can also draw on some of quanteda’s “textplot” functions designed to work directly with its special object classes.

For instance, we can easily determine which words were used mnost differentially by Trump versus Cruz using some “keyness” statistics and plots. Here we recreate the dfm, remove punctuation and English stopwords, group by speaker, subset by just Trump and Cruz, compute keyness statistics, and then plot the keyness statistics. We can do all of this in one set of piped operations. 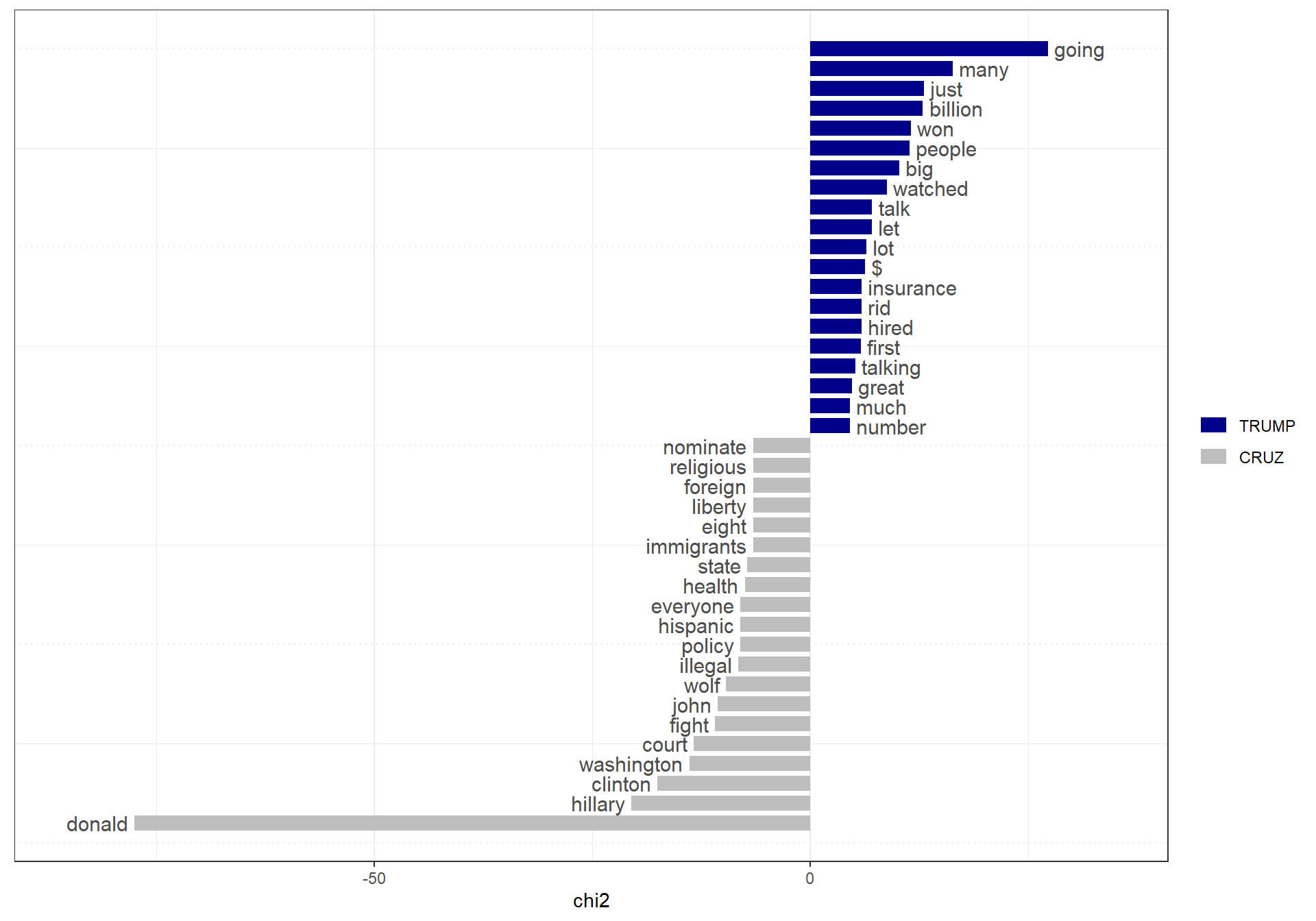